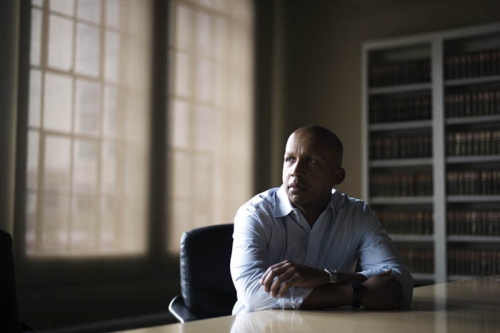 “Hopelessness is the enemy of justice.”

Essential Question: What are creative and effective approaches to building a more kind, compassionate, hopeful, and just future in our communities and our nation?

In this lesson, students will connect their learning from Lesson Five on the essential work of truth telling and reconciliation to imagine a different future for our nation firmly grounded in hope, equity and justice. Using a film segment from True Justice: Bryan Stevenson’s Fight for Equality and excerpts from the Interview Archive, first-person interviews collected during the making of the documentary, students will consider the collective legal work of the Equal Justice Initiative alongside its narrative and educational initiatives including the Community Remembrance Project, The Legacy Museum, and the National Memorial for Peace and Justice.

● Imagine concrete steps they could take to build a more just future for themselves, their community, the country and the world

Materials: Equipment for viewing film clips and interview threads, and copies of handouts.

Length: Two 50-minute class periods plus time outside of class to complete the culminating activity.

Discuss as a class:

* What would a more just and equitable future in your community and nation look like? What would be different?

* What can you imagine believing in and working towards that doesn’t yet exist? (Consider the criminal justice system, schools, museums, other public institutions or policies, neighborhoods - any aspect of society that comes to mind).

Teacher Note: Lesson Six contains one film segment from True Justice. Rather than take notes to use as they create their storyboard from the lesson, the Note Catcher for Lesson Six asks students to reflect upon their learning and respond to the prompts included on the handout.

Clip One: “To Believe in Things We Haven’t Seen” (runtime 5 min)

This final film clip captures the visionary work of Bryan Stevenson and EJI to create a more just and equitable country through their legal, narrative, and memorial work. The clip begins with Bryan telling the story of how his grandmother instilled this value of creating a better tomorrow and concludes with the dedication of the National Memorial for Peace and Justice.

To deepen students’ historical understanding and broaden their perspective on the idea of believing in things we haven’t seen, students will use historical images (Part I) and text from his autobiography (Part II) to learn about the journey of another important leader in the Civil Rights movement, Congressman John Lewis.

Teacher Note: The film-makers conducted numerous interviews to produce True Justice with nine of these interviews free and accessible in the Interview Archive on this website. A selection of these interviews, edited together here to create interview threads, are available for your students’ learning.

Two interview threads were created for this lesson that teachers and students can choose from, or use together, to deepen their understanding of the lesson topic.

Print and distribute Handouts 3 and 4 in the "Resources" section in the lesson so students can follow along with the interview transcripts.

Watch the Interview Threads and have students follow along on the transcripts, underlining details that catch their attention, and jotting down questions and insights that come to mind.

Read aloud Bryan Stevenson’s quote from the opening of Lesson Six: “Hopelessness is the enemy of justice.”

Ask students to reflect on this quote, first in writing, and then discuss the question in pairs or small groups: “What does it mean to have hope in the face of injustice?”

Return to the passage from the film clip in this lesson where Bryan states:

I get frustrated when I hear people talk about, 'Well, if I'd been living during the time of slavery, of course I would have been an abolitionist.' And most people think if they had been living when mobs were gathering to lynch people on the courthouse lawn, they would have said something to complain about that. Everybody imagines that if they were in Alabama in the 1960s, they would have been marching with Dr. King. And the truth of it is, is I don't think you can claim that if today you are watching these systems be created that are incarcerating millions of people, throwing away the lives of millions of people, destroying communities, and you're doing nothing.”

* What are your reactions to Bryan Stevenson’s claim?

* What do you feel is in your capacity and create opportunities that are restorative and rehabilitative?

* What acts can you engage in that move towards a more just and equitable country?

Option One: Have students identify a leader from each of these four historical periods in U.S. History: slavery, racial terror lynching, segregation, and today, with a particular focus on ending mass incarceration. The leader can be a well-known figure in history or someone within your family or community.

Create a character portrait either in print, online, through the written word, or through the visual arts, that illuminates the life and work of each of these leaders. Each portrait will include:

Biographical and geographical background of the leader;

At least one source (photograph, document, letter, a transcribed oral history, etc…) that describes how this leader worked on behalf of racial justice;

Your personal analysis and reflection on why you chose to highlight this leader and how they had to believe in something they had not yet witnessed.

Read Mr. Hinton’s memoir, The Sun Does Shine, and watch video of Mr. Hinton from the Equal Justice Initiative’s Lynching in America website, or from the HuffPost interview of Mr. Hinton to create a character portrait of Mr. Hinton in print, through the written word, or through the visual arts, that illuminates his life and work. 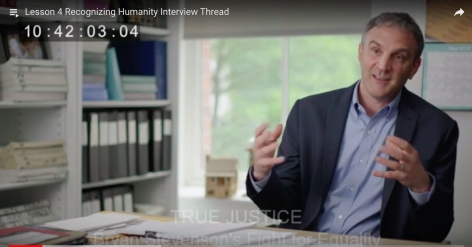 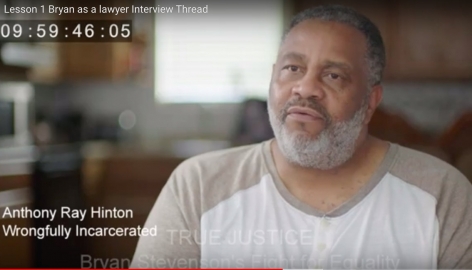 Teacher Note: One of Bryan Stevenson’s most treasured memories is of his grandmother who gave him the confidence to believe in the possibility of a different future for himself and the nation. The work of the Equal Justice Initiative, the Community Remembrance Project, The Legacy Museum, and the National Memorial for Peace and Justice are all expressions of Bryan’s vision and commitment to providing equal justice under the law, transforming the narrative of racial difference in the United States through education, and creating the space for reconciliation and healing by honoring sites of memory and memorialization.

As a culminating assessment for the True Justice lessons, and with the groundbreaking work of the Equal Justice Initiative in mind, students will identify an area of racial injustice -- or injustice in another area-- they would like to remedy and imagine new and possibly creative approaches to addressing and solving the problem. Students are encouraged to review the narrative maps they created from Lesson One through Five and to communicate their idea(s) through the form of expression they believe is best suited to express their vision. Examples could include a performance piece, a written essay, creative writing piece, poem, visual art, music, short-film, graphic novel, or a digital media creation.

This activity is intended to be completed as homework and outside of class.

Reading Literature and/or Information: Integration of Knowledge and Ideas.

RL/RI.X.7. Integrate and evaluate content presented in diverse media and formats, including visually and quantitatively, as well as in words.

RL/RI.X.8. Delineate and evaluate the argument and specific claims in a text, including the validity of the reasoning as well as the relevance and sufficiency of the evidence.

RL/RI.X.9. Analyze how two or more texts address similar themes or topics in order to build knowledge or to compare the approaches the authors take.

Speaking and Listening: Comprehension and Collaboration

SL.X.1 Prepare for and participate effectively in a range of conversations and collaborations with diverse partners, building on others’ ideas and expressing their own clearly and persuasively.

SL.X.2. Integrate and evaluate information presented in diverse media and formats, including visually, quantitatively, and orally

SL.X.3 Evaluate a speaker’s point of view, reasoning, and use of evidence and rhetoric.

SL.X.5 Make strategic use of digital media and visual displays of data to express information and enhance understanding of presentations.

W.X.7: Conduct short as well as more sustained research projects based on focused questions, demonstrating understanding of the subject under investigation.

W.X.8 Gather relevant information from multiple print and digital sources, assess the credibility and accuracy of each source, and integrate the information while avoiding plagiarism.